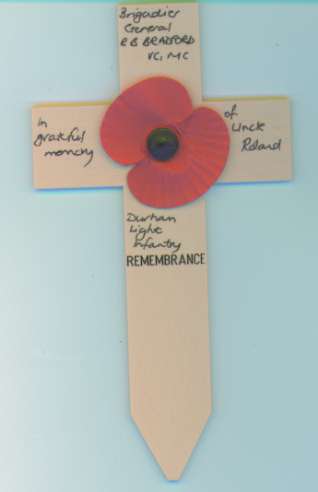 The Victoria Cross
Great Britain's highest award; given for most conspicuous bravery, a daring or preeminent act of valour, self-sacrifice or extreme devotion to duty in the presence of the enemy

The medals of Brigadier-General R.B. Bradford as on public display in the D.L.I. Museum at Durham

This is a photo of the actual entry for 'Roland Bradford' in the CWGC Register for the cemetery
It is repeated below in larger print for the benefit of those with small screens An extract from "The London Gazette," dated the 24th Nov., 1916, records the following:-

"For most conspicuous bravery and good leadership in attack, whereby he saved the situation on the right flank of his Brigade and of the Division. Lieutenant-Colonel Bradford's Battalion was in support. A leading Battalion having suffered very severe casualties, and the Commander wounded, its flank became dangerously exposed at close quarters to the enemy. Raked by machine-gun fire, the situation of the Battalion was critical. At the request of the wounded Commander, Lieutenant-Colonel Bradford asked permission to command the exposed Battalion in addition to his own. Permission granted, he at once proceeded to the foremost lines. By his fearless energy under fire of all description, and his skilful leadership of the two Battalions, regardless of all danger, he succeeded in rallying the attack, captured and defended the objective, and so secured the flank."
Additional Information: Son of George Bradford, of Darlington, Co. Durham. 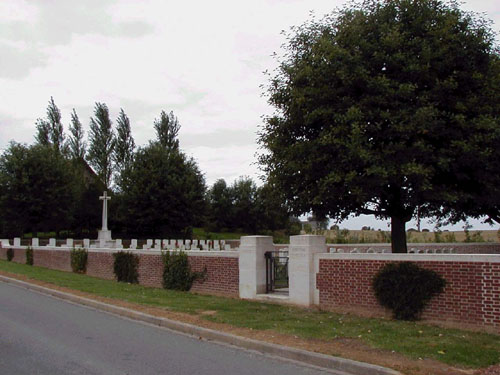 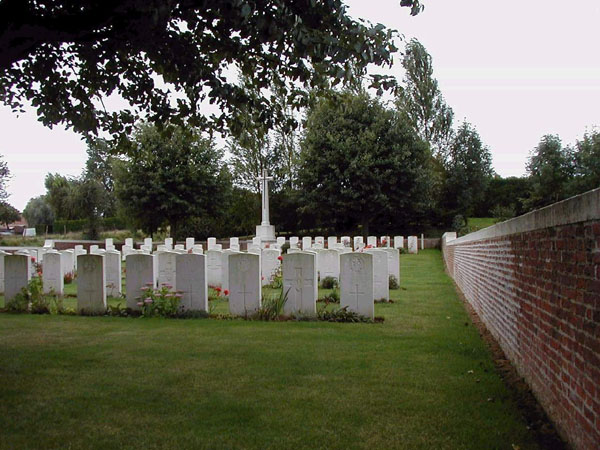 View from the back of Hermies British Cemetery 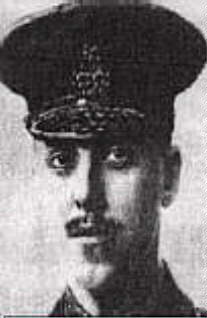 Cemetery: HERMIES BRITISH CEMETERY, Pas de Calais, France Grave Reference/ Panel Number: F.10. Location: Hermies is a town in the Department of the Pas-de-Calais, approximately 3.5 kilometres south of the road from Bapaume to Cambrai, (N30). From the N30 take the D34 for 3.2 kilometres to its junction with the D5E where the first CWGC sign is situated. The Cemetery lies on the right side of the road 150 metres from the junction.

Hermies village was seized on the morning of the 9th April, 1917, by a surprise attack of the 2nd and 3rd Australian Infantry Battalions. It was held against the advancing Germans on the 22nd March, 1918, by the 17th Division, but evacuated on the following day; and it was retaken in September, 1918. It was later "adopted", with Havrincourt, by the County Borough of Huddersfield. The cemetery was made in April-December, 1917, by fighting units and Field Ambulances. There are now over 100, 1914-18 war casualties commemorated in this site. Of these, a small number are unidentified and a special memorial is erected to one soldier from the United Kingdom, who is believed to be one of them. Eight graves in Rows A and B, identified as a whole but not individually, are marked by headstones bearing the additional words "Buried near this spot". The cemetery covers an area of 731 square metres and is enclosed by a low brick wall. 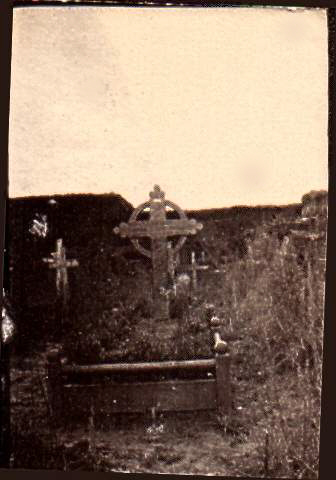 This is a very indistict photograph from our family album. It is of Roland's grave as it was just after the end of World War I.
.. and the grave 'NOW' under the care
of the Commonwealth War Graves Commission 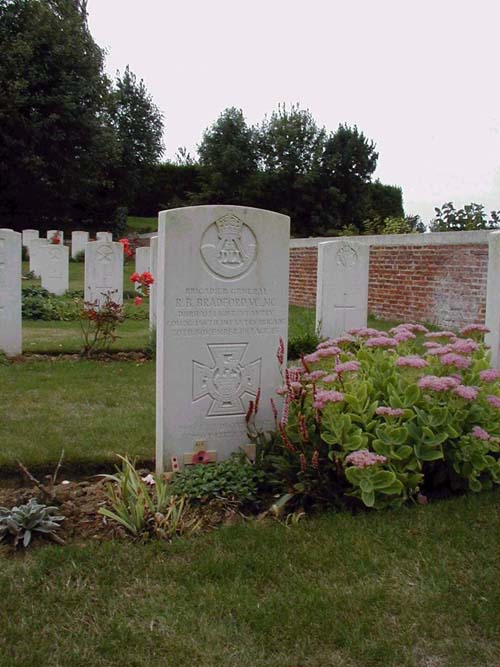 Yes! How different it all looks now after 80 years or so of being taken care of by the Commonwealth War Graves Commission. When we visited the graves of Roland and Jimmie in the 1960's, we found a Scotsman at Hermies British Cemetery whose sole task it was to keep the cemetery neat and tidy. He was making a wonderful job of it; the graves were all tended with care, the grass was beautifully mown and there were fine roses planted and blooming near the graves. At the time the old photograph was taken, the original location of Roland's grave (even allowing for the depressing effect of the total absence of any colour) appears to be one which was set right in the middle of a battlefield. Well indeed it was! So what a contrast now! The scars of battle have been tended. Now those scars have healed over. They have been sweetened by time, by nature and by the tender care of the British gardeners who live locally and daily pour back their life and their careful work into the French countryside which swallowed up so many of our dead soldiers during those dreadful years.
Roland was clearly a man who trusted in the Lord. There is no evidence that he actively evangelized at the battlefront, but there are several occasions upon which he publicly commended his men to pray, and when he mentioned the power of prayer as he addressed his troops. He reminded his men that the Lord cares about each one of us, that He sees all that we do and the manner in which we do it. The implication was quite clearly that the quality of our work matters to the Lord, even if nobody else takes note of it. There was at least one occasion when he is reported as having, before the battle began, requested a list containing exact details of where all the Padres / Chaplains could be found during the battle beginning the next day, adding the comment that the Chaplains were as important as Generals at such times.
(See the 2nd page of Tribute Letters for some testimonies about Roland's Christian faith in practice on the battlefront.)

When Herbert Hensley Henson, the Lord Bishop of Durham, preached the sermon at Roland's Memorial Service he summarised the way Roland lived in these words from the Letter to the Hebrews: "he persevered because he saw Him who is invisible." (Heb. xi. v. 27).


Roland wrote to Lord Northbourne, the Honorary Colonel of the 9th Battalion of the D.L.I., asking him to arrange for music to be sent out to him so that a band could be formed. The intent was to have the band play a hymn each evening when the troops of the D.L.I. were at the Front. He also had a small wooden rostrum made so that he could lead the troops in prayer at the front line. The little rostrum is still in existence. It stands within the D.L.I. Chapel in Durham Cathedral.

Some 80 years later ... Roland Bradford's photograph appeared on the front page of The Times in London on Friday November 12, 1999. 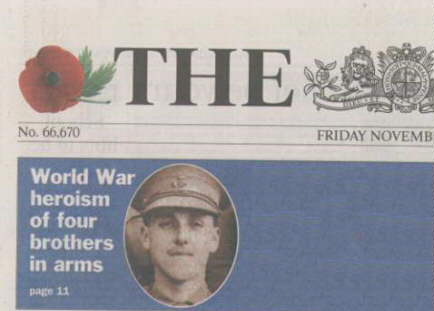 Desmond Young in his book on "Rommel"

* * CLICK on the above "Rommel" book reference TO SEE the most illuminating way in which, of all leaders of men in the two Great Wars, Roland Bradford is used as an example by Desmond Young in the opening chapter of his classic study of Field Marshal Erwin Rommel - - the leader of Germany's Afrika Korps.


Click here for page of Tribute Letters about Roland Bradford

It seems that Roland regularly sidestepped praise directed at him and re-directed it towards the officers and men who served under him. Personal heroics might be useful but only as part of a team of men welded together in trust and friendship..... that seems to be the unwritten message which Roland would have wanted the people back home to understand. He would have been fully aware that there were countless others who were worthy of praise and honour but whose bravery went unrecognized and unsung. That is why Roland reminded his men that God did know about all their devotion to duty even if others didn't.