Photos of the Four Bradford Brothers 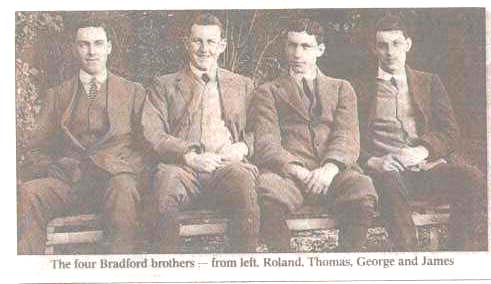 All four brothers relaxing together in "civvies" on a park bench

Colour photo of the four Bradford brothers in uniform


BOOK about the Bradfords:-

Their catalogue describes the book as follows:-
BRIGADIER-GENERAL R.B. BRADFORD, VC, MC AND HIS BROTHERS. Roland Boys Bradford won the VC with 9th Durham Light Infantry (age 25) and was killed in France on 30th November, 1917. His brother, Lieutenant-Commander George Nicholson Bradford, RN, was also killed and won the VC during the action on the Mole, Zeebrugge, 23rd April, 1918. A third brother, James (D.L.I) received the MC. 154 pages. �17.95 - OUR PRICE - �11.95. Order No. B648

The book was still available as of 20th September 2000.

[N.B. This website has no connection of any sort with Ray Westlake or his Military Books and receives no financial advantage from the sale of the above-mentioned book!!!] 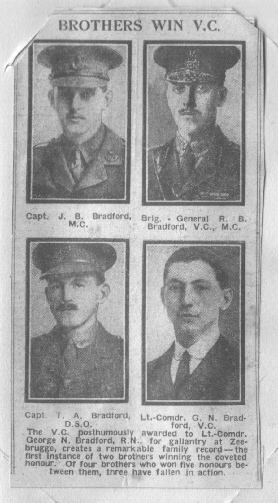 The composite photograph above appeared in one of the national newspapers in 1918. The small text beneath the photograph reads as follows:-
The V.C. posthumously awarded to Lt.-Cmdr George N Bradford, R.N., for gallantry at Zeebrugge, creates a remarkable family record ---- the first instance of two brothers earning the coveted honour. Of four brothers who won five honours between them, three have fallen in action.