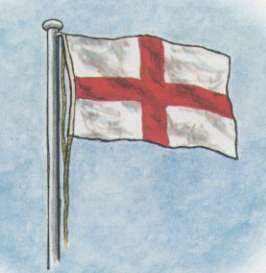 The Cross of St George 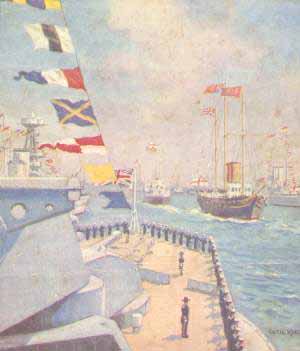 "For most conspicuous gallantry at Zeebrugge on the night of the 22nd-23rd April, 1918. This Officer was in command of the Naval Storming Parties embarked in Iris II. When Iris II proceeded alongside the Mole great difficulty was experienced in placing the parapet anchors owing to the motion of the ship. An attempt was made to land by the scaling ladders before the ship was secured. Lieutenant Claude E. K. Hawkings (late Erin) managed to get one ladder in position and actually reached the parapet, the ladder being crushed to pieces just as he stepped off it. This very gallant young officer was last seen defending himself with his revolver. He was killed on the parapet. Though securing the ship was not part of his duties, Lieut-Commander Bradford climbed up the derrick, which carried a large parapet anchor and was rigged out over the port side; during this climb the ship was surging up and down and the derrick crashing on the Mole. Waiting his opportunity he jumped with the parapet anchor on to the Mole and placed it in position. Immediately after hooking on the parapet anchor Lieut.-Commander Bradford was riddled with bullets from machine guns and fell into the sea between the Mole and the ship. Attempts to recover his body failed. Lieut-Commander Bradford's action was one of absolute self-sacrifice; without a moment's hesitation he went to certain death, recognising that in such action lay the only possible chance of securing Iris II and enabling her storming parties to land."

Georgie Bradford's VC medal is in the Lord Ashcroft VC Collection and is on display in the Imperial War Museum in London.

The Victoria Cross
Great Britain's highest award; given for most conspicuous bravery, a daring or preeminent act of valour, self-sacrifice or extreme devotion to duty in the presence of the enemy 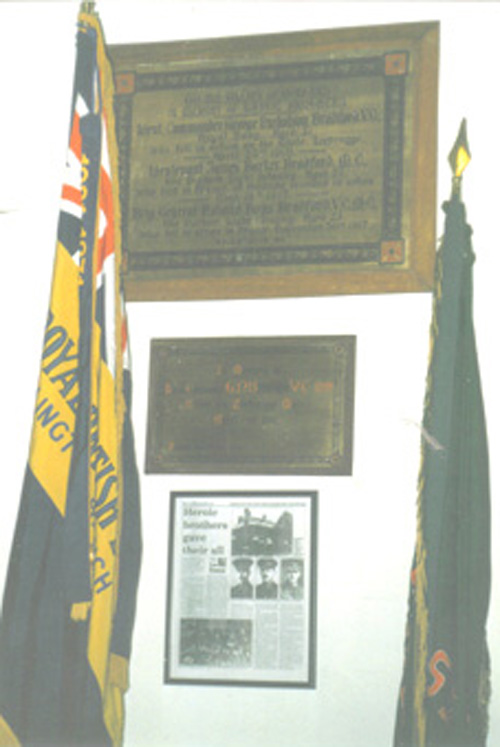 
1. Plaque "To the Glory of God and to Three Brothers" 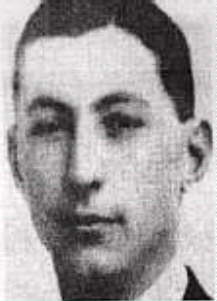 Cemetery: BLANKENBERGHE TOWN CEMETERY, Blankenberghe, West-Vlaanderen, Belgium Grave Reference/ Panel Number: Row A. Grave 5. Location: Blankenberghe Town cemetery is located on the coast of Belgium, 4 km west from Zeebrugge and 20 km east of Oostende. The N34 runs from Zeebrugge to Oostende via the town of Blankenberghe. From Zeebrugge or Oostende the N34 Koning Albertlaan leads directly to the town square. The cemetery itself is located via Kerkstraat N371, then right onto Zuidlaan for 500 metres, finally turning left along Landijk for 100 metres to the cemetery itself. This cemetery is not an open site and access is limited by normal cemetery opening hours. Historical Information: There are now 10, 1914-18 and over 80, 1939-45 war casualties commemorated in this site. Of these, over 10 from the 1939-45 war are unidentified. 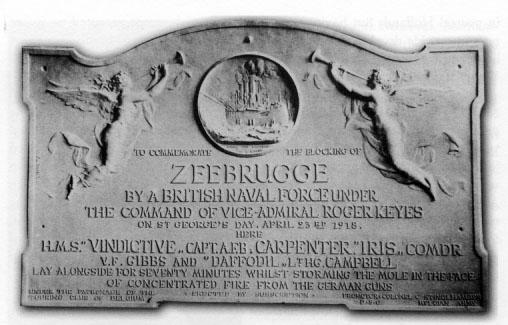 A Commemorative Plaque of the Raid now stands at the Zeebrugge Mole
ST. GEORGE'S DAY REMEMBERED AT ZEEBRUGGE

In Zeebrugge April 2001:- members of the British Royal Marines, the Mayors of Dover and Bruges, led many town's people in a memorial service for the 170 British officers and men of the 4th Battalion Royal Marines, the Royal Marines Artillery and the Royal Naval Landing who perished during the attack on German defences at Zeebrugge Mole near the end of the 1st World War. Afterwards a Royal Marine's band marched through the village to the military cemetary and the memorial monument decorated with floral bouquets and wreaths.
A similar service was held in Dover, where at midday the Zeebrugge Bell was sounded.

In 1917 Allied Merchant ship losses reached the staggering total of nearly four million tons. Many of the U-boats preying on shipping in the Channel and Western Approaches came from the main U-boat base, at Bruges. Vice-Admiral Roger Keyes devised a plan to immobilise this base by blocking its access to the sea. This was the famous attack on Zeebrugge, on the eve of St. George's Day, 1918.

[The note above is one which appears on a Belgian website commemorating the historic event.]

Click here for letters from George Bradford to his schoolgirl-sister.

Georgie, like his younger brother Roland, was a man who recognized fully the absolute necessity of working as a team. He was no "glory grabber". He knew that the bravery of countless men went unrecognized even though they had contributed mightily to the success of many an operation.

One such unsung hero must surely be Gunner Reginald Weeks Royal Navy, one of the Vindictive's sailors, whose grave has been found and brought to public attention by Andrew Bolt.

Mr Bolt has also discovered that Reginald Weeks "was included in the V.C. ballot and then later died of wounds", and says "I hope this adds to the story even though it's about another participant to the battle."

The Dover Patrol, operating out of the town of Dover, carried out the Raid on Zeebrugge on St George's Day in 1918, and the town of Dover each year faithfully continues to commemorate that operation. It was such an important part of the history of Dover, and of the Royal Navy and the Royal Marines, and the memory is kept fresh by annual visits to Zeebrugge, by the noonday ringing of the Zeebrugge Bell on St George's Day and by the presentation of Exhibitions and Lectures. The most recent commemorative event arranged by the Town Council was a most interesting and well researched lecture by Lt.Col. Christopher Nunn OBE, Royal Marines, on Friday 6th July 2001 at Dover Museum. 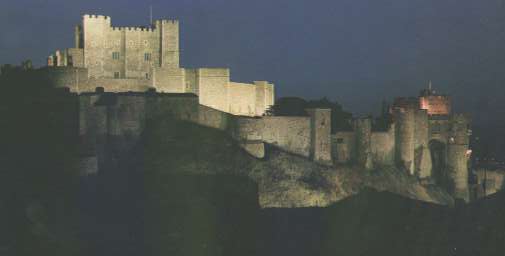 This is a floodlit view of Dover Castle in Kent.

Deep underneath in the chalk are miles of tunnels and vaults used during the Second World War as Planning and Hospital areas.

Yes, way beneath the Castle lie secret underground tunnels, and some of them even date back to the Middle Ages. They were originally built so that the soldiers could get in and out of the Castle without being seen. During the Napoleonic wars the tunnels were extended in preparation for any invasion by the French. Seven of the tunnels could accommodate up to 2,000 troops and this was the only "Underground Barracks" ever to be built in England.

Even now in the 21st Century you can still make a visit to Dover Castle and see the underground tunnels as they were during the desperate time of the 2nd World War.

At that time there were over 600 men and women occupying them. 'Operation Dynamo', planned to evacuate the British and French troops from Dunkirk's beaches, was co-ordinated from here. Also you can see the Command Centre from where Sir Winston Churchill was to lead the Allied Forces to victory.


By way of a reminder for family members (we all have the name 'Bradford' as one of our given names and so do all the grandchildren in the next generation!) here is a pic of one of the most welcome invitations received from the Lady Mayoress of Dover. This gave four of us the opportunity to attend the excellent 2001 Lecture by Lt. Col Christopher Nunn OBE, Royal Marines, on the Dover Patrol's Zeebrugge Raid in which our Uncle Georgie lost his life. 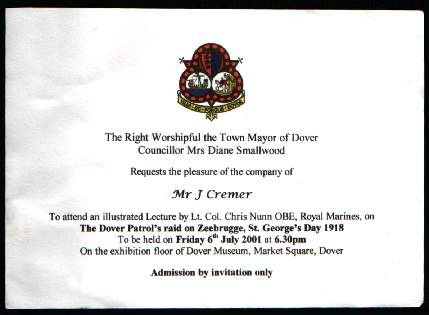 Invitation to attend the 2001 Dover Patrol Lecture on 'The Zeebrugge Raid of 1918'.


Click here to read about George Bradford's remarkable younger brother Roland, youngest Brigadier-General in the British Army and also a winner of the V.C.