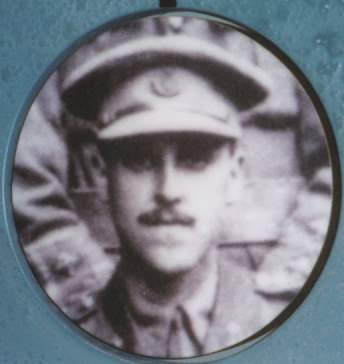 Lt.Col. R B Bradford VC MC
Commanding Officer of the 9th Battalion Durham Light Infantry.
In 1950 Brigadier Desmond Young finally published his book "Rommel". The Brigadier had been taken prisoner by Rommel in North Africa and had a high regard for the skills of the German Afrika Korps leader.

In chapter 2 of "Rommel" appears a paragraph which contains Brigadier Young's remembrance of a very young Brigadier-General Bradford whom he had met 34 years previously. When you consider the time lapse between their meeting and the publication of the book, it would seem that the young Roland Bradford must have made a big impression upon the author of "Rommel". Young's second chapter, "Our Friend Rommel", seeks to provide readers with an overall impression of the "type" of man who was arguably Germany's greatest and most charismatic army general during the Second World War. And the paragraph in question reads as follows:

In all armies there is a small minority of professional soldiers (and a few amateurs) who find in war the one occupation to which they are perfectly adapted. Year by year, in the In Memoriam column of The Times, my eye catches the name of Brigadier-General "Boy" Bradford, V.C., D.S.O., M.C., killed in the Cambrai battle in 1917 at the age of 24, and I remember riding over, unduly conspicuous, I felt, on a white horse, to his brigade headquarters in front of Bourlon Wood and thinking, as I talked to him, that here was someone at last who knew his trade and was equal to any demands that war might make. I remember too, A.N.S. Jackson, the Olympic runner, my contemporary at Oxford, and in the regiment, whom I saw married in 1918 on Paris leave, wearing one ribbon only, the D.S.O. with three bars. There were others like them but not many.
Of this small company of exceptional young men was Rommel, on the wrong side." [Italics by Editor]

Mr Stephen D Shannon, the Curator of the D.L.I. Museum, in his account of the Durham Light Infantrymen who were awarded the Victoria Cross, makes the following intriguing observation:

"In 1942, when General Montgomery [* See note below] took over the 8th Army in North Africa, he was already fifty-four. Roland Bradford would have been just fifty years old."

This comment by Mr Shannon follows on from his consideration of Roland Bradford that "When he died , aged still only twenty-five years old, Roland Bradford was the youngest Brigadier-General in the British Army. It is impossible to guess what higher rank he might have achieved by the end of the Great War had he lived. And what of the Second World War?"
.......... What indeed?!

* EDITOR'S NOTE on Montgomery of Alamein:-
Bernard Law Montgomery, 1st Viscount (1887-1976), has been considered to be the most successful British general of World War II.
From the Royal Military College Sandhurst (as it was called in those days), Montgomery joined the Royal Warwickshire Regiment as an officer in September 1908. In World War I he was twice wounded, was later awarded the DSO for his role in the attack of October 13th 1914 at the 1st Battle of Ypres. He was made Brigade-Major 112th Infantry Brigade in February 1915, took part in the Battle of the Somme (June-November 1916), in the Battle of Arras (April 1917), and the Battle of Passchendaele (July-November 1917). Bernard Montgomery was promoted to the rank of acting Lieutenant-Colonel in July 1918 just before the war ended.