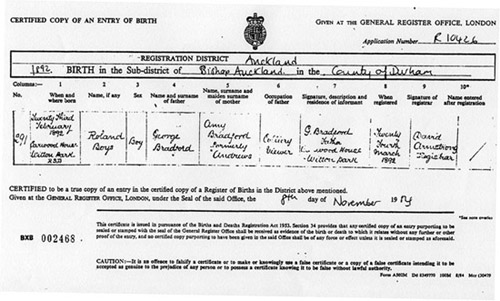 BRADFORD,
(Roland Boys), VC MC, was born 23rd February 1892 at Witton Park, Bishop Auckland, fourth son of George Bradford of Milbanke, Darlington, by his wife Amy Marion Andrews of Willesborough, Kent; educated at Royal Naval School Eltham and Epsom College. 2nd Lieutenant 5th (TF) Bn DLI 14 April 1910; from TF 2nd Lieutenant DLI 22 May 1912; Lieutenant 25 September 1914; (temp Captain DLI 3 March 1915 to 2 May 1915; temp Captain 7th Bn DLI 3 May 1915 to 7 May 1916; temp Major DLI 8 May 1916; acting Lieutenant-Colonel DLI , Commanding 9th Bn 4 August 1916; temp Lieutenant-Colonel 18 August 1917 (acting Brigadier-General 10 November 1917). (to be Brevet-Major on promotion to LG 1 January 1917). Adjutant 7th (TF) Bn DLI 3 May 1915 to - 1916. Brigadier-General 186th Infantry Brigade 10 November 1917 to 30 November 1917. Served European War 1914-1917, France and Belgium with 2nd Bn DLI 8 September 1914 to 2nd May 1915, 7th and 9th Bns 3 May 1915 to 9th November 1917, on Staff 10 November 1917 to 30 November 1917; Mentioned in Despatches, London Gazette 17 February 1915, 15 June 1916 and 4 January 1917, MC (London Gazette 18 February 1915), VC (London Gazette 25 November 1916, as Lieutenant, temp Lieutenant-Colonel MC 9th Bn DLI - Date of act of Bravery 1 October 1916 at Eaucourt l'Abbaye. "For most conspicuous bravery and good leadership in attack, whereby he saved the situation on the right flank of his Brigade and of the Division. Lieutenant-Colonel Bradford's Battalion was in support. A leading Bn having suffered very severe casualties and the Commander wounded, its flank became dangerously exposed at close quarters to the enemy. Raked by machine gun fire, the situation of the battalion was critical. At the request of the wounded Commander, Lieutenant-Colonel Bradford asked permission to command the exposed battalion in addition to his own. Permission granted, he at once proceeded to the foremost lines. By his fearless energy under fire of all descriptions, and his skilful leadership of the two battalions , regardless of all danger, he succeeded in rallying the attack, captured and defended the objective, and so secured the flank."), 1914 Star and bar, British War Medal, Victory Medal, Killed in action 30 November 1917 when his headquarters, near lock 7 on the Canal du Nord, was hit by a shell.

In March 1912 he passed the examination for a commission in the Regular Army, being placed 6th in the list of thirty-six successful candidates, and was gazetted to the 2nd Bn.


Here is an interesting little pic of Roland from the family album. It's from November 1912 and looks rather as if it must have been taken in the early equivalent of one of our DIY Passport-Photo-Kiosks! 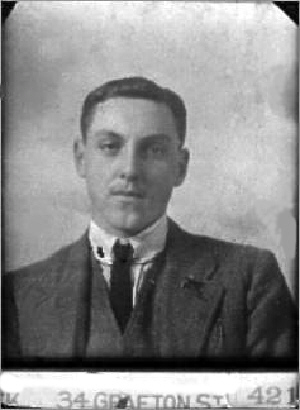 The Adjutant of the 2nd Battalion in 1912, Lieutenant-Colonel F.G. Maughan wrote of Roland:-
"From the day that Bradford joined the Battalion, I was conscious of his strong personality, and I think that others received the same impression. At the time we would not have expressed this in so many words, one did not stop to consider whether a newly-joined subaltern was gifted with a personality or not but merely formed a general opinion of whether he was the right material for making a useful soldier, whether he was likely to be a credit to the army and his Regiment. There were no two opinions about this as regards Bradford.

From the beginning he was all keenness and enthusiasm in the right direction. He was ready to turn his hand to anything no matter how unfamiliar the task might be, and he would set to work with a calmness and often an originality of thought which brought success when older men did not expect that he would do more than make a good attempt.

Newly-joined subalterns were encouraged to keep a horse and to hunt, if this was within their means. Bradford took to hunting with enthusiasm and was ever ready to learn all he could. The result showed itself at Lichfield in the Spring of 1914. As the hunting season drew to an end, without seeking advice, he bought a horse and entered it in the local point-to-point meeting, and though he had no previous experience of riding in a point-to-point, he won a fine race and in good company. He took a prominent part in all games, especially those with his men, organising and leading them, but not interfering in the role of an officer in a manner to mar the men's enjoyment.

His activities were not confined to pursuits which appealed naturally to an athletic lad of twenty. He occasionally wrote short stories, the theme generally being some incident in the hunting field. He was also in great demand at concerts, at which he told amusing stories with much gravity, and was one of the very few officers who used to read the lesson in the Garrison Church at Lichfield.

He went through his recruit's drill like any other subaltern, though no doubt with greater ease owing to a naturally quick mind and a well made athletic body. Later, when given scope for his abilities, he displayed those high qualities most necessary in a good soldier - a high sense of honour, readiness to accept responsibility, an alert mind and rapidity in making decisions. He was very keen when anything out of the common had to be done, when he had plenty of ideas and showed the courage of his convictions. I do not think that anyone who knew him in peace was surprised that he succeeded in war, even to the height that he attained."

When war broke out, Bradford embarked for France with the 2nd Bn, landing at St Nazarre on 10th September 1914. A fortnight later he was gazetted Lieutenant. In May 1915, he joined the 7th Bn as Adjutant and remained in that post until early 1916 when he acted as Brigade-Major.

This next very old photograph from a national newspaper shows something which to us looks quite ridiculous from our perspective in the age of high-powered jet aircraft. But as we look at it, we need to bear in mind that we are thinking back to the era of the biplane and of a time long before sophisticated equipment such as bombsights; it was a time when bombs were thrown out of the planes! So here we see a two-stage plan by a young Lieutenant Roland Bradford. Its purpose was to reduce the chance of troops being spotted by aircraft.
History doesn't seem to relate whether the idea was ever put into use in France! But, amazing as it may seem to us, it was under consideration by the 'top brass' at Colchester. 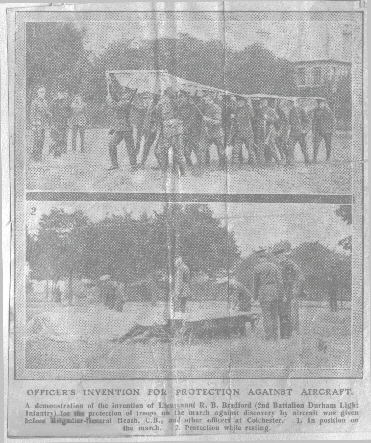 For the benefit of those of you with small screens, the text beneath the photograph is repeated here:-
Officer's Invention For Protection Against Aircraft

A demonstration of the invention of Lieutenant R.B. Bradford (2nd Battalion Durham Light Infantry) for the protection of troops on the march against discovery by aircraft was given before Brigadier-General Heath C.B., and other officers at Colchester. 1. In position on the march. 2. Protection while resting.

In May 1916, Roland Bradford joined the 9th Bn as second-in-command. As 2i/c and then as Commanding Officer, he remained with this Battalion until November 1917, and enhanced its reputation and created in it a fighting spirit that made it famous throughout France.

It was whilst leading this Bn, and also temporarily the 6th Bn DLI, on October 1st 1916, he was awarded the VC for a brilliant piece of work, the outstanding incident in a day full of gallant deeds.

At the beginning of November 1917 Bradford was promoted Brigadier-General to command the 186th Brigade of the 62nd (West Riding) Division, becoming at the age of twenty-five the youngest General in the British Army.

It was whilst leading his Brigade subsequent to the attack on the Hindenburg Line, that he was killed by a stray shell. In the orders of the 62nd Division, published a day or so later, his death is recorded in the following terms:-

"It is with the deepest regret that the Divisional Commander has to announce that Brigadier-General R.B. Bradford VC MC (DLI), commanding the 186th Infantry Brigade, was killed in action on November 30th. Though General Bradford has been so short a time in command of the 186th Brigade, the exploits of that brigade in their wonderful advance on the 20th November and succeeding days will ever be associated with his name, no less than will the fighting and consolidation in Bourlon Wood. The 62nd (West Riding) Division is the poorer by the loss of so gallant and determined a leader and the army can ill afford to lose a soldier of real genius such as was our late comrade."

The British Commander-in-Chief, then Sir Douglas Haig, wrote:-
"The example of his unselfish courage and devotion to duty, is in my opinion, very worthy of being kept in continual remembrance by a nation he died to serve."