List of VCs awarded on the Somme - plus a bibliography 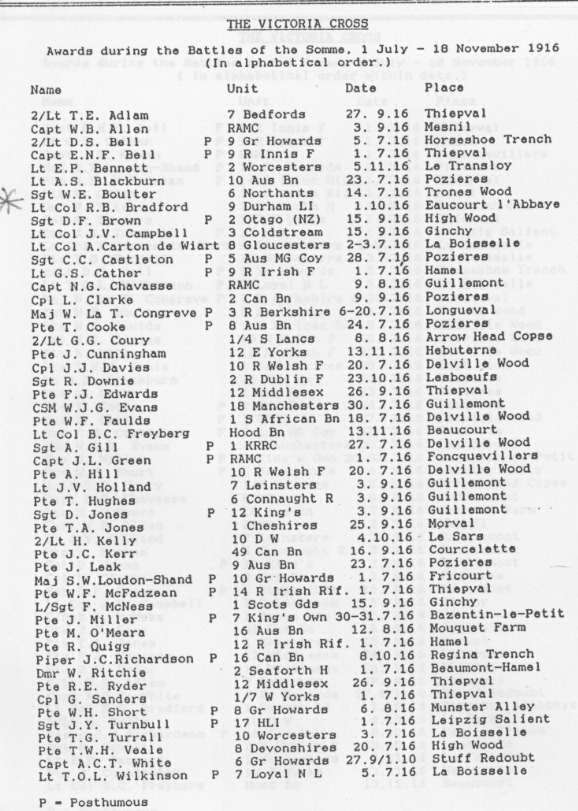 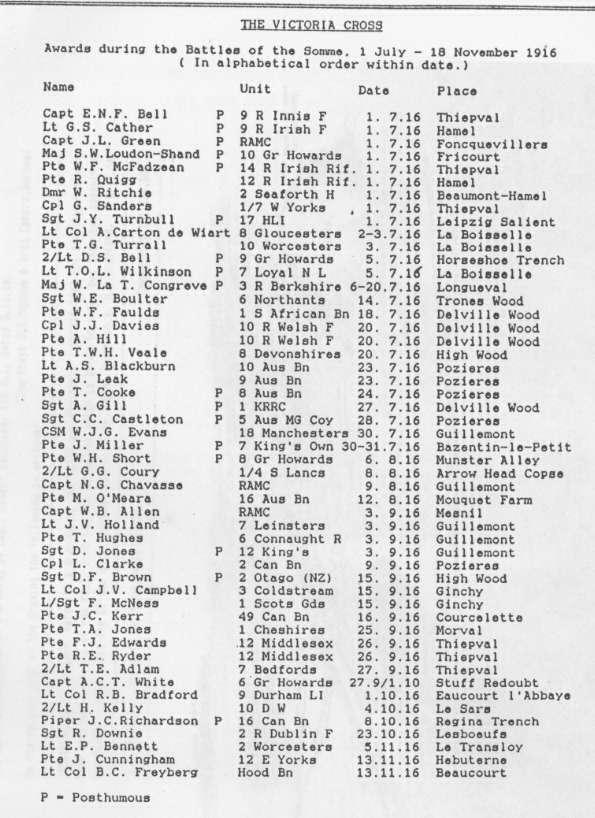 THE BATTLE OF THE SOMME - suggested reading.

GENERAL READING
THE GREAT WAR GENERALS ON THE WESTERN FRONT 1914-18, by Robin Neillands (published in paperback by Constable Robinson at �12.99) This book will do much to dispel the myth about the callousness of those men. Robin Neillands is a writer and a military historian. Click here for more information about this myth-shattering book about the alleged callousness of the generals.
THE SOMME, by A H Farrer-Hockley (revised edition. Severn House Publishers, 1976) This is an analysis of the battles with discussion about the commanders and personalities involved and the background to the offensive.
SOMME, by Lyn Macdonald (Michael Joseph, 1983) An account of the Somme offensive based on the experiences of survivors. Includes maps and photographs.
WHEN THE BARRAGE LIFTS, by Gerald Gliddon (Gliddon Books, 1987) A topographical compenium of the Somme battles providing a short history of each town, village, copse and wood associated with the Somme. Locations in alphabetical order.
THE SOMME THEN AND NOW, by John Giles (After Battle Publications, 1986) Lavishly illustrated account of the battle. Contempoarary photographs and the scene today, extracts from diaries and interesting aerial photos of the battlefields today.
THE SMOKE AND THE FIRE, by John Terraine (Sidgwick & Jackson, 1980) Several chapters of this book on myths and anti-myths of war are devoted to the Somme. The author sets out to refute certain misconceptions concerning the battle, and to demonstrate their lack of credibility. Some interesting observations.
DOUGLAS HAIG, THE EDUCATED SOLDIER, by John Terraine (Hutchinson & Co, 1963, and reprin ted in paperback by Lee Cooper,1990) In this study of Haig's generalship the author devotes a chapter to the origins, planning and conduct of the Somme offensive with a summing up.

PARTICULAR READING
THE FIRST DAY OF THE SOMME, by Martin Middlebrook (Allen Lane, The Penguin Press, 1971) An absorbing account of the opening day of the offensive - 1st July 1916, with a review of the plan and preparations leading up to the battle. Many accounts from survivors - British and German. British and German Orders of Battle, Senior Officers' casualty list and a useful appendix on touring the battlefield.
ATTACK ON THE SOMME, by E.G.D. Liveing (Spa Books,1986) An account of 1st July 1916 by a subaltern in the 12th (Rangers) Battalion, London Regiment, who was wounded on that day. His unit was in 56 (London) Division and their objective was Gommecourt, north of the main battle zone.
THE HELL THEY CALLED HIGH WOOD, by Terry Norman (William Kimber, 1984) A very detailed account of the fiercely defended High Wood in September 1916. Many sketch maps and photos. The book describes some of the bloodiest fighting of the offensive.
THE SOMME 1916, by Norman Gladden (William Kimber, 1974) The experiences of a soldier of 1/7th Battalion Northumberland Fusiliers, who arrived on the Somme in September 1916 and subsequently saw action in front of the Butte de Warlencourt amongst other places. His battalion was part of the 50 (Northumbrian) Division.
POZIERES 1916, by Peter Charlton (Lee Cooper, 1986) The story of the Australians and the bitter fighting for Pozieres and Mouquet ('Monkey' or 'Mucky'!!) Farm.. In five weeks of fighting the Australians suffered some 23000 casualties. Maps and photos.


NOTE >>>>>> A number of the books listed above have appeared in paperback since their original publication. The Barnsley Chronicle has published, in laminated softback, a series of three books on the four PALS battalions that amde up 94 Brigade 31 Division. These closely researched histories give a graphic and vivid description of the attack on Serre, 1st July 1916, in which they suffered very heavy casualties.
They are:-
PALS (13th & 14th Battalions) YORK & LANCASTER by Jon Cooksey;
PALS (11th Accrington Battalion) EAST LANCS by William Turner;
SHEFFIELD CITY BATTALION (12th Battalion) YORK & LANCASTER by Ralph Gibson and Paul Oldfield.

Finally, and also in paperback, is the story of the Ulster Division's attack on Schwaben Redoubt on the 1st July 1916 in "THE ROAD TO THE SOMME" by Philip Orr (Blackstaff Press, 1987).