AMONG the deeds of exceptional bravery commemorated yesterday, none could surpass the story of the four "Fighting Bradford Brothers".

Roland and George Bradford were the only brothers in the Great War to be awarded the Victoria Cross. James and Thomas Bradford were also honoured for their courage, James being awarded the Military Cross and Thomas, the oldest of the brothers, the Distinguished Service Order.

George and Amy Bradford lost three of their sons in the war. Only Thomas survived, until his death in 1966, and for years Mrs Bradford would attend the Armistice Day service at Folkestone. The extraordinary story of the Fighting Bradfords, as they became known, has been put together by Stephen Shannon, curator of the Durham Light Infantry Museum. Thomas, James and Roland, the youngest, all served with the regiment. George joined the Royal Navy.

While all four showed their coolness and courage under fire, the brief military life of Roland Bradford is one of the most remarkable stories of the First World War. When he was killed in action at 25, he was a brigadier-general, the youngest general in the British Army.

Born near Bishop Auckland, he was a second lieutenant when the war began. The 2nd Battalion Durham Light Infantry (DLI), in which he served, landed at St Nazaire in France on September 10, 1914, and faced its first action ten days later at Troyon, when it suffered, in a few hours, atrocious casualties.
In February 1915 he won the Military Cross and in August 1916, after a number of rapid promotions, he was given command, as a temporary lieutenant-colonel, of the 9th Battalion DLI, a TA unit from Gateshead. In Beyond Praise, a booklet published by Durham County Council, Mr Shannon says: "During the next 16 months, Roland Bradford was to turn the battalion into one of the finest fighting units in the British Army."
He won his VC after being ordered to take command of the 6th Battalion DLI as well and advance towards the German lines as part of the 50th Division. They came under withering machinegun fire, but Colonel Bradford, then just 24, rallied his soldiers and led them forward to secure the flank. The citation recorded his "fearless energy" and "conspicuous bravery".
Twenty days after being given the command of 186th Brigade as a brigadier-general, he was killed by a stray German shell during the Battle of Cambrai on November 30, 1917.

George Bradford was awarded his VC posthumously for his bravery during the raid on Zeebrugge harbour on April 23, 1918. He was killed in action on his 31st birthday.

James Bradford won his MC during action in March 1917 at Gommecourt in France. He died when 27 after being wounded at Arras two months' later.

Thomas Bradford, who won the DSO, was badly wounded at Ypres in 1916. "He once said he felt he was the coward of the family because he survived the war," Mr Shannon says. 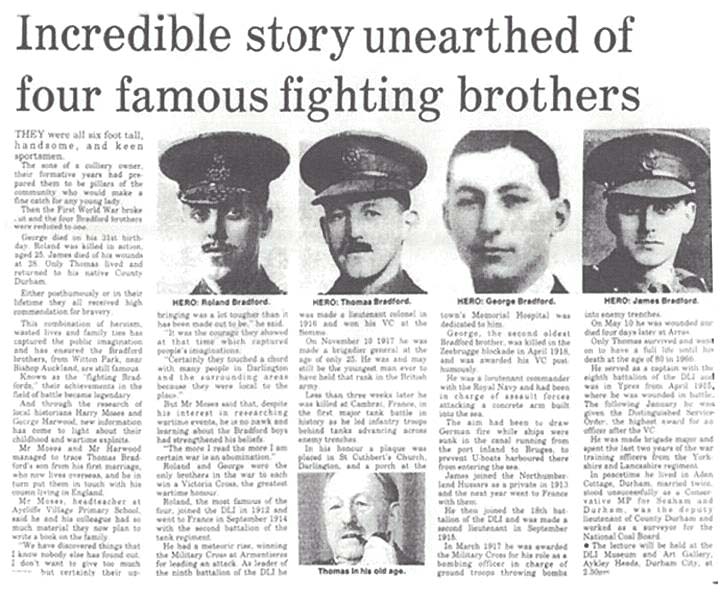 Due to the smallness of the print in the above article we have taken pity upon readers and typed out the entire article.

The story of four brothers' bravery in the First World War will be told in a lecture in Durham today. HELEN NOWICKA has spoken to two local historians who have unravelled the remarkable story of the "Fighting Bradfords" of County Durham.

They were all six foot tall, handsome, and keen sportsmen.
The sons of a colliery owner, their formative years had prepared them to be pillars of the community who would make a fine catch for any young lady.
Then the First World War broke out and the four Bradford brothers were reduced to one.
George died on his 31st birthday. Roland was killed in action aged 25. James died of wounds at 28. Only Thomas lived and returned to his native Durham.
Either posthumously or in their lifetime they all received high commendation for bravery.
This combination of heroism, wasted lives and family ties has captured the public imagination and has ensured the Bradford brothers, from Witton Park near Bishop Auckland, are still famous.
Known as the "fighting Bradfords", their achievements in the field of battle became legendary.
And through the research of local historians Harry Moses and George Harwood, new information has come to light about their childhood and wartime exploits.
Mr Moses and Mr Harwood managed to trace Thomas Bradford's son from his first marriage, who now lives overseas, and he in turn put them in touch with his cousin living in England.
Mr Moses, headteacher at Aycliffe Village Primary School, said he and his colleague had so much material they now plan to write a book on the family.
"We have discovered things I know nobody else has found out. I don't want to give too much away, but certainly their upbringing was a lot tougher than it was made out to be", he said.
"It was the courage they showed at that time which captured people's imaginations.
"Certainly they touched a chord with many people in Darlington and the surrounding areas because they were local to the place."
But Mr Moses said that, despite his interest in researching wartime events, he is no hawk and learning about the Bradford boys had strengthened his beliefs.
"The more I read the more I am certain war is an abomination."

Roland and George were the only brothers in the war to each win a Victoria Cross, the greatest wartime honour.
Roland, the most famous of the four, joined the DLI in 1912 and went to France in September 1914 with the second battalion of the regiment.
He had a meteoric rise, winning the Military Cross at Armentieres for leading an attack. As leader of the ninth battalion of the DLI he was made a Lieutenant Colonel in 1916 and won his VC at the Somme.
On November 10 1917 he was made a Brigadier-General at the age of only 25. He was and may still be the youngest man ever to have held that rank in the British Army.
Less than three weeks later he was killed at Cambrai, France, in the first major tank battle in history as he led infantry troops behind tanks advancing across enemy trenches.
In his honour a plaque was placed in St Cuthbert's Church, Darlington, and a porch at the town's Memorial Hospital was dedicated to him.

George, the second oldest Bradford brother, was killed in the Zeebrugge blockade in April 1918, and was awarded his VC posthumously.
He was a Lieutenant Commander with the Royal Navy and had been in charge of assault forces attacking a concrete arm built into the sea.
The aim had been to draw German fire while ships were sunk in the canal running from the port inland to Bruges, to prevent U-boats harboured there from entering the sea.

James joined the Northumberland Hussars as a private in 1913 and the next year went to France with them.
He then joined the 18th battalion of the DLI and was made a Second Lieutenant in September 1915.
In March 1917 he was awarded the Military Cross for his role as a bombing officer in charge of ground troops throwing bombs into enemy trenches.
On May 10 he was wounded and died four days later at Arras.

Only Thomas survived and went on to have a full life until his death at the age of 80 in 1966.
He served as a Captain with the eighth battalion of the DLI and was in Ypres from April 1915, where he was wounded in battle. The following January he was given the Distinguished Service Order, the highest award for an officer after the VC.
He was made Brigade Major and spent the last two years of the war training officers from the Yorkshire and Lancashire regiment.
In peacetime he lived in Aden Cottage, Durham, married twice, stood unsuccessfully as a Conservative MP for Seaham and Durham, was a Deputy Lieutenant of County Durham and worked as a surveyor for the National Coal Board.

The lecture will be held at the DLI Museum and Art Gallery, Aykley Heads, Durham City at 2.30 p.m.