Brigadier-General R B Bradford VC MC and His Brothers
ISBN 1 871167 24 8
Recently reprinted and published by Ray Westlake - Military Books.
See below for more details of the excellent books by Harry Moses, published in 2001 and 2003.
The first is the history of the 9th Battalion of the Durham Light Infantry.
The 2003 book is the story of the four Bradford brothers of County Durham
ISBN 1-897585-75-6
Published by County Durham Books
AND
"The Naval VCs" by Stephen Snelling, first published by Sutton Publishing in 2002
in their successful series of 'VCs of the First World War'
ISBN 0-7509-1395-9
AND
Supreme Courage - Heroic Stories from 150 Years of the Victoria Cross
by General Sir Peter de la Billiere, KCB KBE DSO MC*
ISBN 0 316 72591 9
Published by Little, Brown.
ALSO SEE 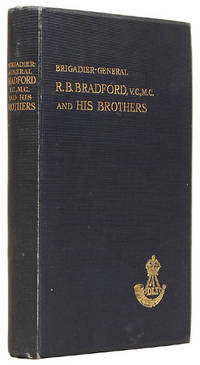 First edition, one of just 50 copies printed on japon. No copy on COPAC, no copy in BL, not in IWM, a single copy (Calgary) on OCLC.

The four Bradford brothers were the sons of a Durham colliery owner. Three were killed in the war; two won the VC, the only brothers to do so; and the third won the MC. The survivor Thomas Bradford was awarded the DSO for his services with the 8th Bn. DLI.

This copy inscribed by Thomas and by Major Welch, one of the compilers: "To George Hunter, To whom that part of the book which deals with Roland Bradford owes so much." Loosely inserted two-page letter from Welch to Hunter: "The book owes more to you than to anybody else, and in sending you a copy I wish to express to you again my warm thanks for the difficult work you did in bringing it into being." Hunter has added a page of pencilled notes on his involvement in the writing of the book, and on the delays that attended its final publication. Loosely inserted news-clipping about Sir Thomas (as he later became) Bradford's retirement as a magistrate in Durham in 1961 at the age of 75; he died in 1966. A nicely provenanced copy of a desperately uncommon book.

Octavo. Original blue ribbed cloth on bevelled boards, title gilt to the spine, and to the upper board together with the crest of the Durham Light Infantry. Triple-fold photogravure frontispiece, printed in sepia, facsimile signatures. Very slightly rubbed at the extremities, spine a touch sunned, else a very good copy

BOOK ON THE BRADFORD FAMILY

THE FIGHTING BRADFORDS
Northern Heroes of World War One


The book is published as a hardback and has fourteen chapters. Chapter 10 is devoted entirely to the Bradfords. Interestingly the chapter (pp 235-270) is headed as follows:-

Back in 2003 County Durham Books made the following release:-

The major new biography of four heroic fighting brothers was launched in County Durham at the beginning of June 2003.

Author and retired head teacher Harry Moses talked about the remarkable military careers of the Bradford Brothers at the Durham Light Infantry Museum and Durham Art Gallery on Saturday June 7 when he launched his latest book about them.

Published by County Durham Books, the publishing arm of Durham County Council, The Fighting Bradfords looks at the men behind the medals and what it was like to be a young man caught up in some of the most ferocious battles of World War One.

The brothers - Thomas, George, James and Roland - had a tough, but middle class upbringing and served with exceptional heroism in The Durham Light Infantry and the Royal Navy.

Thomas, of the 8th Battalion The DLI was awarded the Distinguished Service Order. He survived the conflict and was knighted for his services to the community in 1939.

George, a Royal Navy Lieutenant Commander, was killed at Zeebrugge on his 31st birthday and awarded a posthumous Victoria Cross.

James, who served with the 18th Battalion The DLI, won the Military Cross in March 1917 for leadership in an attack on a German strongpoint at The Somme. He died from his wounds two months later.

Roland, who was also awarded the Victoria Cross, died in November 1917 on the Cambrai battlefield. At 25, he was the youngest Brigadier General in the British Army.
He served initially with the 2nd, 7th and 9th Battalions The DLI and was appointed to command 186th Infantry Brigade, 62nd West Riding Infantry Division in November 1917.
He and George were the only brothers in World War One to receive the Victoria Cross.

In a foreword to The Fighting Bradfords, Sir Peter de la Billiere who was the British commander during the Gulf War and himself a DLI soldier, says the brothers "epitomise the finest tradition of bravery and leadership within the British Services."

This book will be available to purchase from 9th June 2003 and any orders placed prior to this will be despatched on this date.
To purchase copies of this book, please visit www.durham.gov.uk/countydurhambooks
The Fighting Bradfords
ISBN 1-897585-75-6

BOOKS about the Bradfords:-

Another older book has been reprinted recently, author not known, and is currently being advertised online by "Ray Westlake - Military Books" of 53 Claremont, Malpas, Newport, Gwent, NP9 6PL - Telephone: 01633 854135 - Fax: 01633 821860
It is listed under "VICTORIA CROSS" (Link is at bottom of this page)
I.S.B.N. 1 871167 24 8
This older book was first published just after the Great War for private circulation among members and friends of the Bradford family.
The latest limited edition of 300 copies has been published by Ray Westlake - Military Books, 53 Claremont, Malpas, Newport, Gwent, South Wales.
It is desired to thank all who helped in the preparation of this little book, but more especially to acknowledge the assistance given by C. Turley-Smith M.A., Major T Welch M.C.
A great debt of thanks is also owed to Christina Boyd-Smith without whose help, enthusiasm and persistence the latest reprint would never have taken place.
Printed by Anthony Rowe Limited, Chippenham, Wiltshire.

[N.B. This website has no connection of any sort with Ray Westlake or his Military Books and receives no financial advantage from the sale of the above-mentioned book!!!]

The author traces the 109 year life of the battalion from its formation in the Volunteer Rifle Corps after 1859 through to its final disbandment in 1968. In both World Wars it served from the beginning to the very end, finishing as Occupation Troops in Germany in 1919 and 1945. It played a distinguished part in the Battle of Ypres, the Somme, Arras and the last German offensive in 1918; and in World War II in the B.E.F. Campaign, Gazala and the Western Desert, El Alamein, Mareth, Primosole Bridge, D Day and in Normandy, the Rhine Crossing and finally into Germany; A fighting record second to none.

'This is an admirable history of a fine battalion. It makes good use of unpublished accounts by officers and men who fought in two World Wars, to illuminate so many of the eternal truths about men in battle.'

This widely researched book includes many accounts drawn from letters, diaries and oral interviews by officers and men who served in the battalion. It is a fine historical record of faithful service, high endeavour and grievous sacrifice.

Sydney Jary, author of the best selling '18 Platoon' has called it 'one of the best battalion histories I have read'.

Retired headmaster Harry Moses, B.Ed., was born in Tow Law, County Durham. A lifelong military historian, his previous books include a history of the 6th Battalion The Durham Light Infantry, The Faithful Sixth. He is an interviewer with the Imperial War Museum, and regularly travels to meet with veterans and record their experiences. In writing this stirring history of a sister battalion, Harry Moses completes a trilogy of histories of the 6th, 8th and 9th Battalions of the Durham Light Infantry which served together in the renowned 151 (Durham) Brigade of 50 Division.

Softback, 441 pages, 54 photographs, 32 maps, Roll of Honour and List of Honours and Awards.

STEPHEN SNELLING is a journalist and writer, and a member of the Military Historical Society and the Gallipoli Association. He has already contributed two titles to this series: Gallipoli and Passchendaele 1917. He lives near Norwich.

The Victoria Cross is a distinction that transcends class and rank, age and reputation, and serves to honour the virtues of leadership, selflessness and undaunted valour. It is Britain's highest military honour. Forty-two of the VCs awarded during the First World War resulted from naval operations, widely spread in theatres as far apart as the Atlantic and Mesopotamia, East Africa and the North Sea. These awards were won in all manner of fighting ships, from disguised schooner to light cruiser, motor-launch to submarine, and river steamer to battlecruiser. What unites each of the winners is a rare defiance, an unwavering bravery against the odds.
This book tells their individual stories in gripping accounts of the actions at sea, such as the landing at V Beach at Gallipoli where hundreds of lives were lost, yet the six VC winners fought on regardless of the great danger they faced. Trying to recover casualties, Captain Unwin searched for the living among the dead, amid heavy machine-gun fire, while shells were falling all around and bullets peppered his limbs.
The most famous of all VCs of the First World War, 16-year-old boy seaman Jack Cornwell, paid the ultimate sacrifice in the Battle of Jutland, and provided a war-weary nation with an inspiring symbol of sacrifice and devotion to duty. One third of the recipients of the Victoria Cross died during the action for which they were awarded the medal.

The Naval VCs continues the established style of Sutton Publishing's successful 'VCs of the First World War' series by providing a concise biography of each man involved. Through the use of original archive material, the author gives us a valuable insight into how ordinary men performed such extraordinary deeds, and provides a fitting tribute to these men who sacrificed so much for their country.